If you think this crowd's ugly, you should see the dancing girls. Kermit : I didn't promise anybody anything.

What do I know about Hollywood, anyway? Just a dream I got from sitting through too many double features. Kermit's Conscience : So why did you leave the swamp in the first place? Kermit : 'Cause some agent fella said I had talent. He probably says that to everybody.

Kermit's Conscience : On the other hand, if you hadn't left the swamp, you'd be feeling pretty miserable anyhow. Kermit : Yeah. But then it would just be me feeling miserable. Now I got a lady pig, and a bear, and a chicken, a dog, a thing, whatever Gonzo is. He's a little like a turkey. A little like a turkey, but not much.

Rainbows, Frogs, Dogs And 'The Muppet Movie' Soundtrack At 40

Kermit : A motorcycle cop is chasing us. Fozzie : Right, frog. Kermit : Why not complain to the owner? Kermit : Well, it's sort of approximately how it happened. Rowlf the Dog : Oh. Broken heart, right? Rowlf the Dog : Listen, when you've been tickling the ivories as long as I have, you've seen a broken heart for every drop of rain, a shattered dream for every falling star. Kermit : Exactly. She just walked out on me. Rowlf the Dog : Ah, typical.

Kermit : What's happening? Kermit : Hey, Fozzie, look up ahead there.


Fozzie : What is that? Kermit : Maybe we should give him a ride. Fozzie : I don't know, he's pretty big. Big Bird : Oh, no thanks. I'm on my way to New York City to try to break into public television. Fozzie : Oh. Hm, good luck. Miss Piggy : Oh Kermie, you were so courageous, so magnificent! Kermit : Gee, I don't know what to say.

Fozzie : Say the bear was magnificent. After all, I did the driving. Gonzo : And I took a hundred-foot belly flop onto a moving car! Miss Piggy : Yes, but Kermit assumed the awesome responsibility of command! Fozzie : Oh, brother.

Just splendid! Just take a look at it. Kermit : All I can see are millions of frogs with tiny crutches. Miss Piggy : Don't you dare! Teeth : I wouldn't think of it. Teeth : Too true. Too true. It is indeed a problem for us to 'probosculate' upon. But it seems to me the frog and the bear are temporarily out of service. Kermit : Don't worry, Animal, your big scene is coming up.

Floyd Pepper : Yeah, just be cool and eat another seat cushion. Kermit : That's Piggy! Fozzie : Yes, I know! Rowlf the Dog : Hey, you do think we should help her with her bags? Fozzie : Aah, no. Fozzie : No, nah, un-uh. El Sleezo Patron : Hello, sailor, buy me a drink? Kermit : Well, you see, I'm not a sailor, I'm a frog. El Sleezo Patron : Oh, cut the small talk and buy me a drink.

Kermit : Who's driving? My sister and I had this soundtrack album, and we listened to it exhaustively and, to my parents, probably exhaustingly. Not only that, but we hauled out the family's manual typewriter and pecked out all the lyrics. This was our version of trying to crawl inside music, I think, to see what was going on.

There were words on the album we most definitely either didn't understand or had to have explained to us: I don't think we knew what "aurora borealis" meant, let alone why "Aurora borealis shining down on Dallas" was a trippy lyric in "Can You Picture That? Teeth and the Electric Mayhem. And by the way, I'm certain I didn't understand what a funny band name Dr. Teeth and the Electric Mayhem is. This is, in large part, the genius of both the music and the movie.

It's a sophisticated piece of art, brilliantly made, that has complicated themes and winky jokes that are for parents. But at the same time, it not only appeals to kids but almost teaches kids how to watch movies and how to listen to music. That music, in this case, comes from Paul Williams and Kenneth Ascher. Williams has found himself maybe best remembered for this contribution to the world, despite the fact that he wrote or co-wrote a truckload of music, especially popular stuff from the '70s: "We've Only Just Begun," "An Old Fashioned Love Song," "Evergreen" and "Rainy Days and Mondays," among others.

He even wrote the lyrics to the theme song from The Love Boat. Allow me to take a moment to recommend most highly a documentary called Paul Williams Still Alive, which I wrote about in and which is currently available streaming on Amazon Prime Video or for rent elsewhere. Williams and Ascher aren't afraid to give you songs that are packed with jokes, often a combination of kid level and not. Women get "under your collar," says Rowlf. The whole album walks a line between sophistication and silliness, profundity and playfulness. And all of it seems designed to draw kids into a story they will love and gradually learn to understand.

Several songs include what you might call "singalong" elements, where you hear characters singing along with the music, even when there are no words. Not in the same way as a carefully chosen " hey la " refrain like you might hear in pop music, but more like the nonsense you might make up as a kid. You know, like dunk-a-dunk-a-dunk-a-dunk-a-dunk. It happens at the end of "Rainbow Connection" when Kermit sings, "Laaa da da deeee, da da dooo, la daa da da da dee da doo.

They're not just listening to the music; they're often trying to make it at the same time. They want to sing along, drum along, wave their arms — they want to be the music-maker. They want to painstakingly clack-clack-clack the words onto a page in a pantomime of writing lyrics.

And in The Muppet Movie, the avatars on the screen are both making the music and hearing the music. Fozzie hears the orchestra swelling. Kermit noodles around with nonsense words at the end of his own big number. This is a kid-friendly entry point into movie music and music in general. Fozzie's rendition of "America the Beautiful" raises another delicate matter, which is that he's not particularly in tune. Frank Oz, as Fozzie, just lets it rip. In sharp contrast to Disney's animated films, for instance, where if you don't have a perfect singing voice they will have the music performed by someone who does, Muppet music stays in character.

Fozzie belts it out, just like you do, and while Oz can sing much closer to on key, even while affecting very different character voices as he does for most of Miss Piggy's "Never Before, Never Again" , it's not relevant to this performance. Fozzie is not sweating pitch. And his stuff is still great — listenable, relistenable, hummable, singable.

The point of being moved to offer a rendition of "America the Beautiful" in the car, the film posits, is to do it at the top of your lungs. Some singing is meant to be pretty, and some just deeply felt. 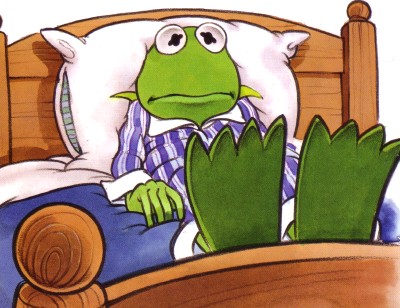 Again: It's teaching kids how to relate to music in a lot of different ways. And when music itself is a character expression, it can also be a joke. You gotta see it in your mind! And yet, there are songs on the album that are just searching and beautiful and thoughtful, ones that go back to that "Rainbow Connection" mood. Even after he has been rescued, he can't forget the experience: "You can just visit, but I plan to stay; I'm going to go back there someday.

As the film approaches its finale, the characters get their big break — from Orson Welles, no less.